This book is for those experiencing domestic violence/marital abuse & for those they are most likely to turn to for help.

If you have followed a social media link to this page and have already read this, I thank you in advance for sharing the link with your followers in hopes of someone finding the help they need.
Chapter One

I Should Be Dead…But I’m Not! 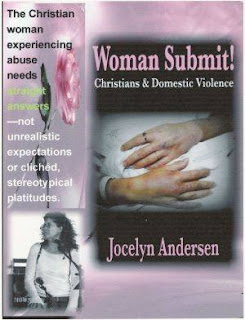 My pastors and I had made the difficult decision not to hide the abuse from our church family any longer.
As a member of the Praise Team, I was accustomed to standing before the congregation, but this particular evening the bruises on my face made the public appearance a bit more difficult. Due to the unusual absence of my husband, the person responsible for the bruises and an associate pastor of our church, it was imperative that the issue be dealt with as quickly, delicately, and honestly as possible.
He was evading arrest. This was the second time in six months he had tried to kill me.

Woman this is WAR! Gender, Slavery & the Evangelical Caste System: Andersen, Jocelyn: 9780979429323: Amazon.com: Books
Some (by no means all) buying options for this book:

Thank you in advance for sharing this excerpt with your connections on social media and for buying the book. Woman Submit!.., is for those experiencing violence and abuse and also for those they are most likely to turn to for help. It could be you!

I’m so thankful I’ve never experienced anything like this. Thank you, Jocelyn for reminding me to have patience and compassion if God places someone in my path that needs help.

Jocelyn, what a mighty God indeed. I am so thankful to Him for sparing your life so you could be the voice you now are for those who are gagged. What the enemy intended for evil, God has turned it out for your good and the good of many many more than you can count.

I remembered a dark night on the streets of Hackney, London as a small child walking with my bloody faced mouther on our way to the hospital . . . I now know what the faint scare on her lips symbolizes. How selfish of me then . . . and now, especially as a Christian. I have not been fair to her, by not understanding the impact of her life abuse experiences, so so much more than DV . . . I now recognize I need to not only repent but address her behaviour toward me from a different perspective, certainly with more grace. A few days ago as I pondered on meeting her again soon (last time 2016) I sensed I didn't want to touch her, I then realised I still have issues I need to address. Vising your site and reading the first chapter of your book is a reminder of what I need to do.

I will purchase the book, peruse your site in more detail and I am certain it will be a helpful tool in my preparation for the new project I am part of that includes an arm for setting up and running refuges.

Thank you for sharing your pain, shame and beauty you have acquired for your ashes through the faithful loving-kindness of our heavenly Father, who promised to never leave or forsake you.

Once again, a vision comes before me of perpetrators. This time it was more clear, I saw men who are repentant and need support to overcome their guilt and shame.

Mary, Thank you so much for sharing your experience with us as we navigate the minefield of abuse and its aftermath. May God use you in a great and mighty way to be a blessing to others.