Teaching gender hierarchy leads to contempt and abuse of women 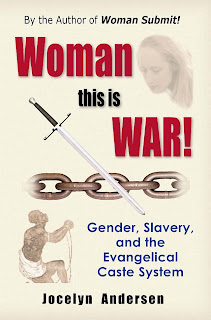 Last week men were symbolically urinating on women at the complementarian “Men of God 2012” conference held at Calvary Baptist Church in Bellefontaine, Ohio (complementarianism assigns strict gender roles to women and men with women being subordinate to men in all things).

Since there were no women in attendance, the women’s restroom was opened for use by the men. In an article describing his experience at the conference, ** Paul M. Dohse Sr., editor of the blog “Paul’s Passing Thoughts” and advocate of non-hierarchical church leadership, posted on his blog that while using the women’s restroom, he found the toilets and floor in every stall sprayed with urine.

He wrote that this was the case with the women's restroom throughout the conference. In an email interview with this writer, Dohse said the men's restroom was never in such condition but would not go so far as to say he believed men at the conference were demonstrating hatred and contempt for women by symbolically urinating on them. He did say, “it's hard for me to believe what I saw wasn't deliberate.”

He blamed the condition of the women’s restroom [in part] on the anti-woman messages preached at the conference by Dr. Voddie Baucham. Baucham, who will be coming to the Orlando area this fall to speak at a conference with Dr. R. C. Sproul, is a prominent leader within the complementarian movement. He presented three keynote messages at the Bellefontaine conference, all of which were saturated with anti-feminist rhetoric and an “us” against “them” attitude. In part two of his three part “Culture War” presentation, he portrayed women as being just a notch above the serpent on the “food chain,” of which males were at the top.

From the urine-sprayed condition of the women’s restroom at Calvary Baptist, it seems clear that Baucham was successful in whipping the men into an anti-feminist frenzy. Successful leaders understand that movements with clearly defined opposition are the most successful. In her book, Out of the Cults and into the Church, Janis Hutchinson quoted Hoffer when she wrote, “Mass movements can rise and succeed without a belief in God . . . but never without a belief in a devil. This is because the strength of a mass movement is proportionate to the vividness and tangibility of its devil. When Hitler was asked whether he thought the Jew should be completely destroyed, he answered, ‘No . . . We have then to reinvent him.’ Hitler further explained that ‘It is essential to have a tangible enemy, not merely an abstract one.’”

The devil of the complementarian movement is the feminist, and by complementarian standards, any woman who does not accept a subordinate position to males is a feminist.

On his blog, Dohse asked, “Will New Calvinism Become a Christian Woman’s Worst Nightmare?” In the email interview, he added, “I would look hard at the fact that the patriarchy movement is teaming up with New Calvinism. That's some seriously bad news for women.”

One study found that a belief in strict gender roles was “associated with less perceived seriousness of scenarios depicting interpersonal aggression.” In plain English, that means that those who held to the belief of female subordination did not feel that violence against women was all that serious. This cannot be divorced from the almost wholesale acceptance by evangelicals of complementarianism, which began in 1987 with the issuance of the Danvers Statement. When equality is trashed, as recently demonstrated in Bellefontaine, contemptuous attitudes and actions follow.

Domestic abuse and violence occurs more frequently among professing Christians than is commonly believed. Some family counselors, such as, Barrington H. Brennen, boldly assert that complementarian teaching is directly responsible for accelerating abusive and violent behavior in husbands.

In 2012, anonymous men at the Bellefontaine conference expressed contempt for women by symbolically urinating on them. Dohse said there was so much urine [in places] on the floor of the women’s restroom that it was difficult to keep it from saturating the hem of his pants. Statistics show what misogynistic men have been doing in the privacy of their homes for decades. How many of the men who urinated all over the women’s restroom at Calvary Baptist Church in Bellefontaine went home and mistreated or beat their wives?

The outrageous behavior of its followers should expose the unbiblical roots of complementarianism for what it is. Jesus said, “you shall know them by their fruits.”

With the complementarian position becoming more extreme, one can only hope adherents will recognize it for the evil it is, withdraw their support, and allow it to implode upon itself and self destruct.

Christians need to stop supporting this garbage and expend our physical and financial resources on worthy endeavors in the advancement of the gospel. Let us seek to set captives free rather than supporting those who seek to enslave. Stand up and walk out on them. Leave complementarian leaders to preach to empty pews and mop up the stinking mess of their own shame.

*** After interviewing Dohse, who first reported about this on his blog in 2011, Andersen published this article on “The Examiner.” Dohse, who attended the Bellefontaine conference, told Andersen [in an email interview] that he stood by his report and analysis of the condition of the women's restroom (vastly different from the men's restroom). Within 24 hours of this article being published on The Examiner, it was reported that Dohse was visited by men who allegedly pressured him to remove his report of the conference from his blog. Dohse, who to his credit remains a staunch advocate of non-hierarchical church leadership, nevertheless caved to the pressure and removed the report from his blog.

Gender hierarchy teaching is [in and of itself] abusive to women.