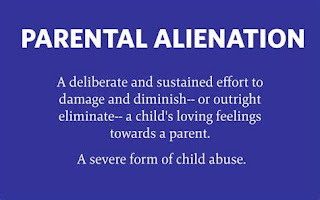 High conflict families are disproportionately represented among the population of those contesting custody and visitation.

Research indicates that that custody litigation can become a vehicle whereby batterers and child abusers attempt to extend or maintain their control and authority over their victims after separation.
Although, research has not found a higher incidence of false allegations of child abuse and domestic violence in the context of custody/visitation, officers of the court tend to be unreasonably suspicious of such claims and that too often custody decisions are based on bad science, misinterpretation of fact, and evaluator bias. As a result, many abused women and their children find themselves re-victimized by the justice system after separation.
~~ Stephanie Dallam
Read More: http://www.leadershipcouncil.org/1/pas/dv.html
- September 07, 2021

Email ThisBlogThis!Share to TwitterShare to FacebookShare to Pinterest
Labels: Abuse and Child Custody